Philosophy
Welcome to Dancer's Edge! We believe in finding the hidden talent and potential in every student! Helping dancers achieve all of their personal and professional goals are essential to establishing a foundation for future success. Dance teaches us dedication, hard work, leadership, perseverance, teamwork and much more. Developing a well-rounded dancer with concrete life-skills enhances self-confidence and is the core of our curriculum. Using positive feedback, teacher analysis and self-analysis, students are encouraged to continually learn and grow through self-motivation, determination and a passion for excellence. Come dance with us and see the difference!

Valerie Stead Potsos is the head coach of the nationally ranked University of Michigan Dance Team. She is the Director/Owner of Dancer's Edge in Dexter, Michigan. She has choreographed for professional corporate sponsors including Ford Motor Company and much more. Dancer’s Edge was named as “Top Studios on the Move” in Dance Spirit for 2007. Her articles on coaching and dance have appeared in Dance Spirit, American Cheerleader and in Motion Magazines. She is a seminar presenter, and consultant for AACCA (American Association of Cheer Coaches and Administrators) and staff member for Universal Dance Association on topics such as Motivation, Leadership, Team-building and many more!

Along with judging local and state competitions, Valerie has judged studio, high school, College Dance Nationals and Worlds as well for various organizations including Nexstar, Contest of Champions and many more. She coached The Royal Oak Kimball Dance Company and The Royal Oak Kimball Varsity Dance Team for 8 years and has been the coach of The University of Michigan Dance Team since 2001. She also teaches for the kinesiology department, “U-Move” at The University of Michigan. A choreographer for several teams and studios, Valerie has also choreographed for professional singers and for Ford Motor Company at Ford Field. She has been dancing since age three and teaching dance since age fourteen and was a member and captain of The University of Michigan Dance Team. Valerie graduated with a B.A. from the University of Michigan in Communication and Dance Education and has additional graduate studies in Secondary Education from Michigan State University. Valerie resides in Dexter, MI with her husband and three children.

Jenn has been teaching dance in the Dexter area for over 20 years. She specializes in the young dancer and teaches tap, jazz, ballet, and musical theatre. Jenn was the director of the Very Young Dancer program at Dexter Academy of Dance under Mollie Murphy for 7 years. She has 10 years experience in private Summer Camp Administration and lesson planning/teaching in numerous subjects from reading to fine Italian cooking. She is an avid musical theatre performer and choreographer. She works with many area theatre groups such as Ann Arbor Civic Theatre, Dexter Community Players, Saline Area Players, Pinckney Players, and the University of Michigan Gilbert and Sullivan Society both onstage, as a choreographer, and as a dance captain.

Meg grew up in the Dexter community passionate about dance. Meg began dancing at the age of two and competiting at the age of eight. Meg trained in a variety of styles of dance, such as ballet, contemporary, jazz, pom, and hip-hop. Meg is a former member of the Dexter Hight School dance team and a former student of Dancer's Edge. Meg enjoys passing on her love and knowledge of dance to the next generation of dancers. Meg has coached the Mill Creek Middle School Dance Team and has taught at Dancer's Edge for over two years. Meg is currently a student a the University of Michigan and a member of the nationally-ranked University of Michigan Dance Team.

John originally hailing from Ann Arbor has made a return to Michigan from Los Angeles, CA bringing with him over 10 years of professional experience in Hip Hop movement and Jazz Funk.  While getting his degree in Musical Theatre at California State University Northridge (CSUN) where he would star in the shows Urinetown and The Drowsy Chaperone, John was also pursuing his professional career as a dancer and choreographer, having danced with artists such as Demi Lovato, Selena Gomez, Luis Fonsi, and Zendaya as well as having choreographed for artists and networks such as Sammi Sanchez, Tyson Venegas, Got Milk?, Radio Disney, Disney Channel, and Disney Junior.  After a long career in Los Angeles, John moved to New York City after being accepted into The Stella Adler Studio of Acting where he learned from world class faculty and starred in the shows August: Osage County, Troilus and Cressida, and Eastern Standard.  John's first job after graduating from Stella Adler was an Off-Broadway production entitled Comfort Women: A New Musical which then invited him to do the production in Los Angeles which replanted him back in LA.  But now John is back home in Michigan and is especially excited to be working with the elite staff and students at Dancer's Edge!

Rachel has been dancing for over 20 years and holds a BFA in Musical Theater from Oakland University. She also holds a certificate of completion from The Hydrama Classical Greek Theatre Training Program in Hydra, Greece. Dance credits include choreographing for such production as Antigone, Under Milkwood, British Invasion and We've Got Dancin' To Do. Rachel has also danced for The Detroit Dolls and Kid Rock.

Ashley is a competition and ballet instructor at Dancer's Edge. She has been dancing for over 30 years and teaching for 15. She has taught all ages at a variety of studios but is happy to have return to Dancer's Edge where she fell in love with teaching. She has extensive ballet training, but also enjoys jazz, contemporary, modern, and lyrical. Ashely received a Bachelor's of Science from Eastern Michigan University in Dance Studio Management. She began her dance training under Wendi DuBois and became a member of Youth Dance Theatre. Ashley enjoys choreographing for her students and has won choreography awards over the years. Ashley believes in building a strong technical foundation for her students to be able to develop their skills safely in a positive environment. Ashley lives on Belleville Lake with her son and to kitties.

Ali teaches technique for competition and recreational students as well as choreographs. The 2020-2021 season will be Ali's 3rd year at Dancer's Edge. She has trained in almost all types of dance since she was three. Currently Ali is studying Dance & Movement Science at the University of Michigan. Ali's dance training comes from a combination of studio and dance team dance. Ali will complete her BFA in 2022. Ali is a senior member of the University of Michigan Dance Team. Ali believe dance should be fun but also instructional on not only how to be a better mover, but why technique wotks for the body. Ali is very excited for this upcoming year, working with more students.

Jazmyn coaches the Dexter Varsity Dance Team and the Edge All-Star Dance Team. For 2 years, she has trained dancers ages 6-9 and at the high school level. She was apart of developing the Edge All-Stars team. Jazmyn has 12 years of studio dance training in ballet, contemporary, tap, and competitive dance. She graduated from Swartz Creek in 2017, and is currently a snior at University of Michigan-Flint. She will graduate in April 2021 with a major in International Business and Finance. Jazmyn is also the vice preisdent of the International Business Student Organization.

Morgan is a dance instructor at Dancer's Edge, where she teaches acro, pom, and other styles, as well as coaching the Mini Comp Team. This is her third year at Dancer's Edge. She is currently a junior at the University of Michigan studying Computer Science. She has danced since the age of four, including dancing with J. Dance Kollective and her high school dance team in Fairfax, VA, and is now a member of Cadence Dance Company at Michigan. Morgan believes that dance training is life training, and above all your should dance because you love it. Morgan is from Fairfax, VA.

Kayla's latest achievement as a dancer has been making the University of Michigan dance team, for the fourth year, her senior year! During her past three years, the team had their best finishes in program history in jazz and hip hop at UDA College Nationals. Along with the success at UDA, Kayla and some of her teammates are National Champions in the D1A Game Day division at NCA. She is also continuing her adventures as a third year employee of the highly respected dance company, Universal Dance Association. Over the past two years she has worked several high school and college camps in the summer taking her to fifteen different states across the country. She has choreographed for several high school and middle school dance teams in different genres of dance, and been hired to clean choreography by other schools as well. This year she was named the new technique consultant for her former high school, that she was a four year member of, Swartz Creek.

Kim has been studying dance and performing for over twenty-five years, and has been teaching for over ten. Kimberly is an alum of the Repertory Company at Deborah’s Stage Door. She is experienced in ballet, tap, jazz, lyrical, contemporary, and modern. As a teenager, she competed extensively throughout the country; winning numerous awards including top overall soloist at Showstopper’s East Coast National Dance Competition three years in a row.  She also received many scholarships at major dance conventions such as New York City Dance Alliance, West Coast Dance Explosion, Tremaine, L.A. Dance Magic and Co. Dance Convention. Aside from competing, Kimberly had the opportunity to perform with Jerry Lewis, Ricky Martin in Palm Springs, members from N*sync at Detroit's Hob Nobble Gobble and was featured in Detroit's Thanksgiving Day Parade for many years.

Upon high school graduation, Kimberly received a scholarship to the dance program at The University of Michigan. While at U of M, she had the opportunity to study under Judy Rice, Peter Sparling, Bill DeYoung, Jessica Fogel, Amy Chavasse, and Robin Wilson; as well as dance with The University of Michigan Dance Team. After attaining her BFA in Dance Performance and Choreography, she accepted a scholarship to a summer intensive with River North Dance Company in Chicago and moved to NYC in the fall to further pursue her dance career.

While in New York, Kimberly was a company member of The Next Stage Project, Jennifer Muller/ The Works, and DoubleTake Dance Company. She had the opportunity to perform throughout the east coast at renowned venues such as New York’s City Center, New York’s Summer Stage, Brooklyn Ballet Theater, Broadway Dance Center, and Peridance Theater. She was also featured in a solo performance with her husband; a percussionist, at The Juilliard School.

Kimberly and her husband relocated to the Ann Arbor area, and over the last six years, has found her passion of teaching. She has been keeping busy as a dance instructor as well as a mommy to her son. Kimberly could not be more thrilled to be a part of the wonderful team at Dancers Edge!

Alyssa is from Grank Rapids, Michigan and a student of University of Michigan. She is trained in a variety of styles such as tap, hip-hop, jazz, contemporary, ballet, and pom throughout her 13 years at Imprint Dance Company. Following her participation in the Varsity Dance Team at Forest Hills Central High School, Alyssa continued her dance career as a member of the University of Michigan Dance Team. Alyssa has taught dancers ages 5-18 at her hometown studio for a few years, and is excited to continue sharing her passion for dance at Dancer's Edge! She has choreographed ballet pieces for junior dancers that have received high honors at local competitions. In addition to this, Alyssa chreographed several performances as a two year captain of her high school dance team. Alyssa believes dance should be an enjoyable outlet for kids of all ages and types and is dedicated to creating a safe and happy learning environment. 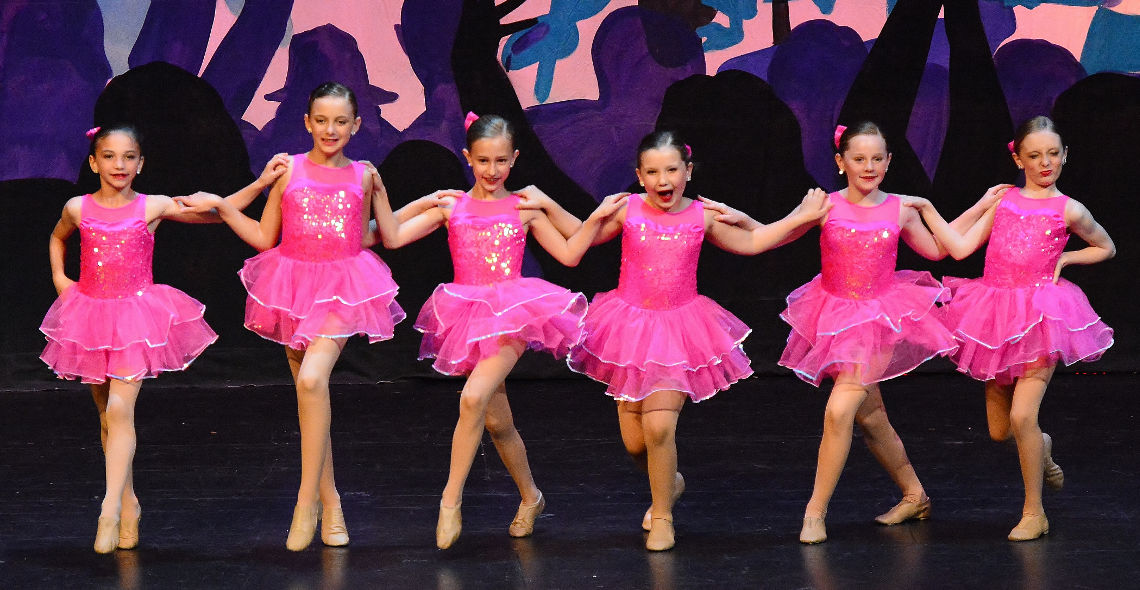